As I said in a past blog post I’m going to be writing some posts about showing some of my past artwork. I’m trying to mix it up by showing different categories of work I have done and from different periods of my life. This time I thought I would share what I used to do in high school before I went to Nossi College of Art. When I was a kid I always drew what I saw, so if I had a toy I liked I would try drawing that, I would also draw our pets, furniture, and cartoon characters I saw on TV. Pretty much anything I had a good reference for I would try. Doing this from such a young age I feel gave me the ability to reproduce almost anything which came in handy when around my other artist friends because some of them were naturally talented at original art but couldn’t reproduce anything. This of course is all pencil/pen drawing, nothing like paint, water color or media that was more advanced, don’t forget we’re talking about when I was still a kid. I have distinct memories of being in church sitting on the floor and trying to draw a Ghostbusters mummy action figure I had and the drawing turning out fairly accurate. I remember staring at my dog to get his face right. I stared for hours at pictures and other drawings meticulously analyzing every detail so I would get my picture right. It was just something I did and I believe is how I naturally trained myself into becoming an artist, which of course led into many other artistic areas.

Below I’ve included a few drawings I managed to hang on to that range from my freshman year in high school to before I went to Nossi. I would remind you though to keep in mind none of these pictures are traced. When I said I would reproduce almost anything I meant purely looking at the object/image and drawing freehand from what I saw. The He-man picture I drew is actually the only He-man picture I remember drawing my entire life, which is really funny considering how much of a He-man Fan-boy I am. The Thundercat image are ones I drew in my freshman year when I had a rediscovered my fascination with Thundercats because they had JUST been put back on TV. There are a few Dragonball Z characters as well that were a part of my early days learning to draw a bit of anime/manga style which I’ll talk about more in another blog post. Then lastly there are a couple more random ones of the wrestler Sting that I decided to draw and a pair of hands I really liked from the cover of a music album.

To wrap this post up I will say I just about don’t draw anymore due to my job as a Graphic Designer. I also think it’s due to all of my time now is devoted to work, wife, son, house work, and friends. What little tiny bit of my time I get I try to play a video game here and there so drawing has taken a backseat to everything else unfortunately. Hopefully when my son gets older we’ll sit and draw some together and maybe I will rediscover my passion for drawing.

Most people that know me already know how much of a nerd I can be, so if you read this prepare for a bit of geek speak. Back in 2003 a game came out right around or before the hugely popular World of Warcraft called Star Wars Galaxies. It was an amazing online multiplayer game based on the Star Wars franchise. I wasn’t sure if I’d like it or not but I have a co-worker who was into it and he got me hooked. Long story short I played this game from 2003-2011. I played the game off and on and became among the most knowledgeable people in the game as well as one of the wealthiest players with the most in-game credits. My peak had me at over 600 million credits, that didn’t count all the items I had in game which when I added up the value once was well over 1.5 billion credits. I had three characters that I played throughout my time. My blue skinned, short, rodian named Kargo, who was an expert crafter/reverse engineer. My He-man and the Masters of the Universe clone and beast master named ‘He-man’, who I would walk around in game dressed as He-man and would roleplay to everyone as if I was that character in Star Wars. Then lastly my primary character that I named Charles’ and later renamed to Chuckster, who was an amazing Evil Sith Lord, he even got a small following of being known as one of the few Jedi on my server who could solo many missions and was an amazing tank for a group. If you are reading this and know of this game then it might interest you to know that Charles’/Chuskter had completed 4 holocrons, the entire aurillian village, and completed most of the game’s final Heroics.

Around 2008 I started toying with the idea of making a video series for Youtube about Star Wars Galaxies (SWG) but couldn’t decide if I wanted to make a tutorial series or just a let’s play series or recording myself doing some of the toughest things in game. I finally decided that due to how much time I spent in game helping people that I would be best at doing a how to/tutorial series. So I came up with “How to Play SWG”. I did over 30 videos of different topics in game from common knowledge to some of the very complex pieces that not many people were very good at. My specialty in game had become Reverse-engineering which started spreading in game by simply word of mouth. Around 2009 I started getting a feeling from articles I read and how the game was progressing that SWG could possibly be shutdown soon. That was when I decided to make most of my videos because I felt otherwise I would have nothing else to remember this game from as well as give others something to look at and remember what they could do in such a game. So in a sense this was sort of my farewell to a beloved game that I had shared so many years with. I greatly enjoyed SWG, I miss the connections I made with other players, and yes even at times the confidence a game can give you when you become a top player. Goodbye SWG you were fun while you lasted.

He-man and my PS3

A while back I became slightly obsessed with customizing my Playstation 3 with He-man stuff. I went looking online and as usual there was nothing for He-man that has already been made by fans. So I decided that it would likely be ME who had to make the stuff to do just that. One of the first things I did was look up He-man themes. There was only one out there and it was really bad. Someone didn’t take the time to think it through and it looked very amateurish. I went with their look but changed it and made all of my own custom buttons for the theme. This required use of photoshop for styling but also other programs to create the actual P3T file needed to use in the actual PS3 system. Many hours of several days later I had finished my theme, or least version 1.0 of it. So after doing so I posted it online to the various free PS3 theme websites like allps3themes.com and bestps3themes.com. Here is the file in case you would like to use the theme yourself, ( He-man_Classic.p3t ). Here is an example of what the theme will look like if loaded on your PS3. 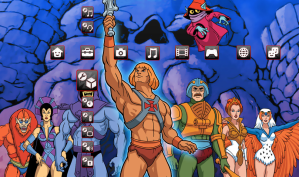 The next thing I did was much simpler, I took a few images scanned from the He-man DVDs and combined them to use on a PS3 controller skin cover. Here is the image that I created that you can also download and use as well for this same purpose. If you use this make sure to use the non-cutout version (the one on the left) so they don’t have to cut it so precise. If you send them the other one it will most likely come out looking terrible.